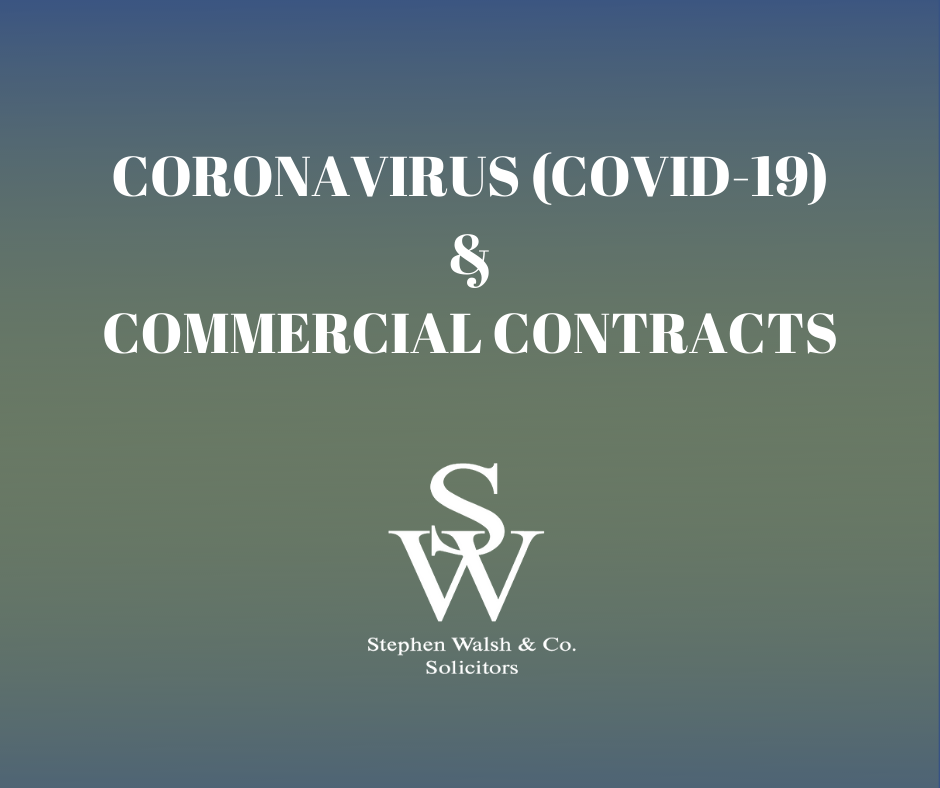 The coronavirus, or COVID-19, has turned the commercial world on its backside.

The commercial contracts that we all take for granted (and that keep the economy humming along) are under the biggest pressure test they will ever face.

Whatever the strict legal position of a party to a contract may be (as you will see what might seem clear never is), we are urging our clients to take a common sense and commercial approach.

The starting point is trying to negotiate an acceptable outcome in the short term. The doors of the courts will be closed for the foreseeable future, and if you try to obtain relief there you may very well be bankrupt by the time your case is finalised. If you have not done so already, bite the bullet and start discussing the situation with the other party to the contract. They will be going through and thinking about, all the things you are.

The clear message is to get on the front foot and deal with it. Leaving your head buried in the sand won’t achieve anything.

I thought it would be helpful for our clients to see (what I think is practical) advice we have been providing in main areas of inquiry we have encountered since things became serious.

Before doing so, an explanation of the legal concepts of “Force Majeure” and “The Doctrine of Frustration of Contract” which may relieve a party to a contract from performing their obligations, is necessary.

You may have already guessed that “Force Majeure” is a concept of French (Civil) Law. The term translated from French is “Superior Force” and most English dictionaries describe it as “irresistible force or compulsion such as will excuse a party from performing his or her part of a contract.”

Here is a generic “Force Majeure” clause used in contracts:

Of course, parties can go into a lot more detail than this (to define specifically what events enliven the operation of the clause). For example, “civil disturbance”, “war”, “strike”, “earthquake”, “flood”, and (dare I say) “pandemic” etc. may be included or excluded. It all depends on the fine print and how that is interpreted.

The Doctrine of Frustration

In essence, for the doctrine (which is part of our common law) to apply there must be and a supervening, unforeseen, uncontrollable and completely unanticipated event that is not the fault of either party that significantly changes the nature of contractual rights and/or obligations such that it is unjust to hold the parties to the strict terms of the contract.

There must also be no Force Majeure clause in the contract. If there is the ‘event’ was foreseen and the Doctrine does not apply.

If the ‘event’ just results in one party having to spend more money on performing the contract or its terms become more onerous or impractical to perform the doctrine will not be successfully applied.

For the doctrine to apply the ‘event’ must have severe consequences. There must be a radical change. It must be shown that:

Every contract and every situation are different. We are entering the uncharted waters of the effect of a global pandemic, government intervention with daily changes in laws about public gathering and social distancing, closure of non-essential businesses and state borders, lack of cash flow, and commercial contracts in Ireland. It’s hard to believe I just typed that combination of words in a sentence.

No one should just assume they will be released from their liability under a contract and no one should simply just terminate a contract based on the concepts set out above. If you get it wrong and damages flow you could be in even worse trouble. Specific advice is a must before doing anything.

Leases in Ireland generally do not include Force Majeure clauses. They usually include clauses about the total or partial destruction of premises by fire, flood, and other acts of God. These clauses allow for rent abatement in the case of partial destruction and termination by either party in the case of total destruction. They do not apply in the case of a pandemic as, you guessed it, the premises remain intact. In the context of a long lease term (of years) and the duration of the supervening event (of say months), it will be very difficult for tenants to successfully argue the Doctrine applies.

So, what does all this mean? Your best bet is to approach the other party and negotiate a suspension of rent or rent reduction so that everyone knows where they stand, and can budget and act accordingly.

Most leases have dispute resolution provisions. If you are not able to have a commercial or any discussion with your landlord or your tenant, you can probably force them to have a without prejudice meeting with or without a mediator.